there are sun problems that are hard to overlook (you’ll get that bad pun after you go through this).

I would be lying if I say I didn’t find this show entertaining- the pacing is tight, the action sequences look cool and they seem to generally well choreographed. I found the set-up pretty goofy- the terms ‘hitmen hitman’ and ‘avengers’ got me good, strangely. The city nightlife lighting is weirdly warm and neon at the same time, which gives off a sheen of neo-noir in terms of visuals… that is, only for that specific time of the day (more on this later). I enjoyed binging this show because, as I said, the pacing is good- in almost every episode there’s a well-timed set-up and resolution. I also loved the attention-grabbing jazzy soundtrack, even in between the action-packed jazz ramp-ups, there are these patches of playful and busy percussion which are nice touches to the overall sound design. 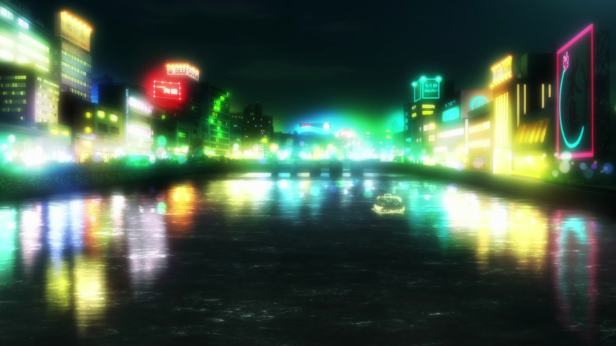 The thing is, however, these things are good… but. The pacing is generally tight but it feels super rushed in the last two episodes- the show did a have a tendency to shove in as many perspectives as possible in the show previously, but then it went a bit overboard; my pea-sized brain was thinking “Wait where did he come from? Wasn’t he going somewhere else? Am I too sleepy to get it because I’m watching this at 2 am?… probably”- and the next thing I see is a knife in someone’s chest. But in the end, it somewhat comes together- because the arc is mainly about two guys, not twelve.

The lighting of the city nightlife is great but during the day, the lighting gets significantly overdone.

There. Are. Sunbeams. Everywhere.

Someone’s looking through their binoculars? Sunbeams. Someone’s just standing out in the open on a bridge under a blue sky? They got you covered… with sunbeams. Those sunbeams really threw me off after a couple of episodes, and I had my metaphorical fingers were crossed that they would tone it down… nope. One time they even changed the angle of the sunlight- in a way that’s not even possible because sunbeams are divergent- anyway, you can see that happening during the running scene in a flashback from episode 9.

I know I’m being nitpicky here, but this was the moment when my patience-kettle burst with the overabundance of these chromatic aberrations and sun streaks- and they don’t even fit the generic art style of the show, unlike Your Name or A Silent Voice, where those visual effects actually fit the art style. And since I have laid down the ‘generic’ buzzword about the art style, I will step back and say the quality of the art relatively stays consistent and that’s impressive.

Alright, that’s enough of that damned sunbeam rant- I sounded like an angry mom who can’t stop complaining about her adopted son who ran away from home 10 years ago, but that’s okay. I also find this whole sunbeam rant kind of ironic because my real name is Roddur- which means ‘sunlight’ in Bengali, and here I am complaining about the overabundance of the thing I was named after.

The animation is also okay, and it’s (surprisingly) consistent in quality.

What’s not consistent in quality, or rather not good in quality at all, is the character writing. Almost all of the characters have this cliché Hollywood witty character template- they all talk in the same way. Banba is like a low-rent Dazai archetype, except Dazai (from Bungou Stray Dogs) has actual charm. Saito is an outlier, but even at that- he’s just a one-dimensional comic relief character. Lin is actually a character who has history, but even the protagonist’s writing is half-baked (like this review). His reaction to his sister’s death was grossly superficial and had no weight to his mood in the later episodes- okay, he’s a hitman, he masks his feelings, but wait… what about his tsundere-like reactions with Banba? Hm… I won’t even talk about Feilang, his character never got the time to be developed in the last three episodes.

I guess the show is more about the cat and mouse chases, the “got ’em” moments and baseball team recruitment rather than the character development. And yeah, I thoroughly enjoyed the missions, but I can’t say that aspect of the show is impressive enough to leave a lasting impression. A lasting impression would need a great cast of characters, and that, Hakata Tonkotsu Ramens didn’t have. This show threw a lot of things at me, some were tasty treats, but hardly any of them stuck long enough to leave an impression… ok, maybe the sunbeams did.

9 thoughts on “Hakata Tonkotsu Ramens is entertaining, but…”