This anime, like the title suggests, is about a family. More specifically, it is a short, sweet (yet engaging) tale of a familial feud and familial integrity. The story is set in Kyoto city where humans live in the city, tanuki crawl on the earth and tengu soar in the skies.

Yasaburo is the third son of the late Shimogamo (who was the former Nise-e-mon: the leader of the tanuki society) and he just wants to lead a ‘omoishiro’ (interesting) life where he imitates humans and learns from his mentor who is a tengu. But his busy life gets busier as the tanuki society prepares for the selection of the new Nise-e-mon from the two representatives from the two main Tanuki families in Kyoto: the Shimogamo family and the Ebisugawa family. Things also get heated up between the humans and tanuki after the mysterious circumstances surrounding the death of Yasaburo’s father: he gets boiled and eaten by the Friday Fellows (comprised of humans).

The narrative of this anime is simply layered but doesn’t forget about its progress through the length of the anime. So, the pacing of the narrative certainly flowed well for me despite the anime primarily having a thematic approach episode by episode.

The first few episodes were a bit alienating because Yasaburo isn’t an insightful dude when comes to the drama development and even though he explains the context and premise pretty concisely- I wasn’t sold on the story in the first four episodes.

But the story did sell itself well around the end of the first quarter when Yasaburo was done introducing the characters and the plot line took the front seat. The anime still had that thematic focus until the last three episodes where the story reached its climax but it had a flow. I keep emphasizing this, party because I didn’t expect this from an ‘episodic’ anime and partly because I was unknowingly under the impression this is a ‘iyashikei’ anime (and  boy, was I wrong!).

As for the script- I think that most of the time Yasaburo seems to know what he is talking about (especially his short monologues at the end of most of the episodes add an extra layer of engaging context to the whole episode); but there are rare instances when they get long-winded and becomes tangential.

The characters are truly the heart of this show. This is one of those anime where the characters make the narrative; so why don’t I give a brief rundown of some of my favorite members from the cast?

Yasaburo is the protagonist of the series and he has the least expressive personality in the show. He is a type of character who is kind of an observer to the ongoing drama but in no way does he avoid getting his hands dirty- he always stands up for his family when the time came and he is probably the most level headed among his siblings. He also has some strong philosophical beliefs. His vulnerable sides hasn’t been fleshed out, yet; so, his character arc is yet to be laid out. 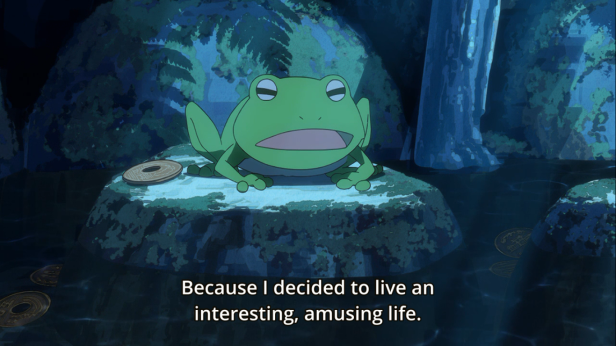 The anime seemed to have focused a lot more on Yajirou’s (second eldest son) character near the end, because he was one the last people to meet with his father before his death. He is a washed-up slob who transformed into a frog to get rid of the guilt of not being with his father till the end of his meet-up. But in the end, by his own volition, he steps up for his family; still though, he doesn’t change completely and reverts back to his usual life as a stationary frog.

Akadama the Tengu is Yasaburo’s mentor and his character is stereotypical of a tired-of-life, perverted geezer. His character may not be as dynamic as Yajirou’s but he is one of the pivotal characters in this drama.

Benten is the mystery mademoiselle of the series and the anime is yet to do a character arc on her (or maybe the development is more subtle than I thought). I hope the second season focuses more on her. So far, she is written as a sweet, generous girl who turned into a cold, bored sadist: and it is a mystery. Then again, there are times when her initial traits are expressed through her generous actions.

The Shimogamo family features diverse character traits (Yasaburo mentions that each of the brothers inherited traits from their father) and their interactions seem sincerely written to me.

Overall, the characters may not be intricate works of dynamic character writing, but they have simple sincerity in their dialogue which adds to this tangibility and relevance to the whole scheme of this story involving  mythical creatures. 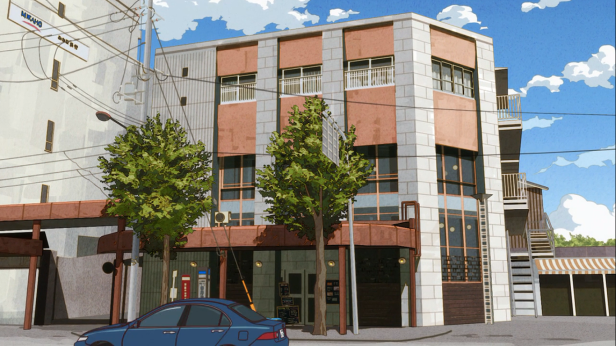 The art style of the anime is quite simple and the animation is relatively smooth and non-extravagant with occasional moments of expressiveness. The character designs don’t have a lot of details but they are drawn pretty neatly with likable use of colors. The background art, on the other hand, is detailed and quite location-based: which is typical of a P.A. Works anime. Geographical relevance in anime has always been interesting to me as the background then looks more conspicuous.

Most of the soundtrack doesn’t stand out except the one that rings in at the beginning of almost every episode where Yasaburo recites contextual dialogue (or introductory monologue). There weren’t any instance where the music didn’t fit in tonally.

The opening is pretty okay with parts of the lyrics displayed in English- which is pretty interesting. The ending has a good slideshow featuring Benten… my sound department reviewing definitely needs more working on. 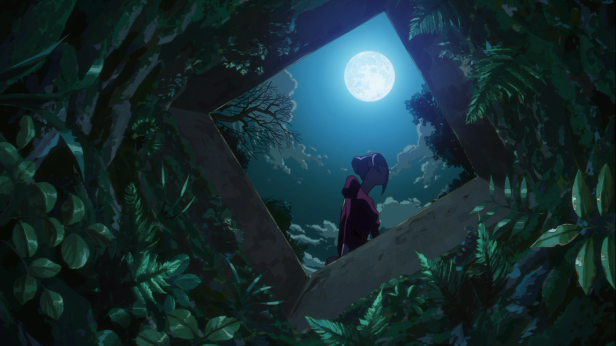 The Eccentric Family, though it heavily features Japanese mythical creatures, is eccentrically not overly showy of the Japanese culture and it seemed to appeal to a broader audience (or the younger audience of Japan). I don’t know why I am mentioning this in conclusion, but it is something I realized after writing down that the OP had English translated lyrics featured in its animation.

I recommend watching this anime if you are looking for a decent character drama. It is no masterpiece but I found this drama quite engagingly structured and it develops with noticeably good pacing. The dialogue might get long winded at times but it generally ties up well. Another conspicuous aspect of the anime is the beautiful background. Anyway, before I repeat anymore points, here’s my rating: 3.5/5.

I am looking forward to the second season this Spring.

One thought on “The Eccentric Family (S1): An Interesting Tanuki Tale”